A piece of my heart 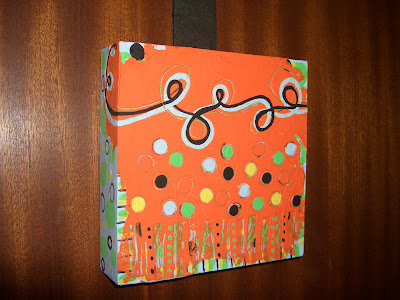 I was drawn in, in a way
that I'd never known before
and so I said so, well no
I didn't actually say so
being the klutz bunny I am
I tried to say so though
and well, wouldn't you know
your open heart heard mine

By some happy circumstance
I was in a position to say
something I never usually do
I said would you, could you
and here's where your heart
listened particularly carefully
because you didn't just say yes
you painted me my 'orange pop'

I have positioned it here
and I've tried it over there
I've even taken it upstairs
but somehow it calls to me
saying I need the dark wood
to lay against to make me glow
I bet that even you didn't know
you'd sent me a piece of my heart.

Dancing with the devil you know

Unreality beckons, whispering in my ear
not so sweet somethings saying lose yourself
in the familiar folds of blissful oblivion
nothing hurts when we drift in the ether
and then everything does afterwards
so then don't think of afterwards
or of consequences, only of release
a chance to lay again and to lie again
rehash our fantasies, detach from reality

And then?
what then?

When we succumb, we alter without and within
losing hard won ground in this ongoing battle
between ourselves and the people
we aspire to be except on those days
when we want nothing more than to be a breath of wind
utterly inconsequential even within our own lives
thus we excuse ourselves from the hurt we cause
when we pause to listen to the malevolent whispers
of unwelcome unwanted visitors from our past

Oh but how they crow, they point and laugh
you see they know, and knowing has it's price
they say pay the piper or lose your soul
and only then might we let you go
but then the dance begins amidst the confusion
as colours brighten and noise levels heighten
unreality takes a hold as sad laughter bubbles up
as if to escape, and as it does you might notice
that it sounds painfully like the cries of hysteria

and then?
what then?

Well you see then you have the aftermath
the resounding impact of the almighty crash
as reality slams through our semi consciousness
realisation dawning, squinting against the light
of a day when all that matters is getting through
until the hour when the doors of the dance hall
re-open to the possessed and dis-possessed alike
because once dance fever re-takes it's hold
it takes the devils own strength to escape it

but only
if you dance

After all the dance hall never closes it doors
we delude ourselves that waiting is in fact control
when our delay is only in anticipation of the music
whereas choosing is but a turning point away
a re-creation of our lives devoid of this tomfoolery
learning instead the rhythms of new songs
ones that nourish once forsaken hearts and souls
and although I know all this there are still dark days
when I find my foot tapping to the old rhythm.
Posted by Jos 11 comments

Sometimes tears fall
and the heart eases
but not always

there are landscapes
arid desserts within
that remain barren

and from this place
it seems that even
words run dry

What did I learn?
that putting up a tent
in a howling gale
is more fun
than taking it down

That nothing tastes
better than hot chocolate
and barbequed sausages
in onion bread rolls
with no salad, just sauce

That a week is too short
I am home now
safe and sound
warm and dry at last
and satisfyingly tired.
Posted by Jos 11 comments